What is a Portosystemic Shunt?

A portosytemic shunt (PSS) is an abnormal blood vessel that carries blood intended to flow through the liver and diverts it away from the liver to the general circulation. The portal system is a special network of blood vessels that collect blood and metabolic byproducts from many of the abdominal organs and allows passage of that blood through the liver to remove some harmful substances and derive nutrition from others. When the portal system is bypassed by a shunt, the blood flows unfiltered back to the heart and is circulated to the body, including the brain.

PSS is seen in dogs and cats, but the majority of cases seen and treated are in dogs. The abnormal vessel is most often congenital (present at birth), and the symptoms are usually seen fairly early in life.  PSS in its most common form tends to affect small and toy breeds, although some large breed dogs can also be affected.

Portosystemic shunt as seen at surgery located in the region of the stomach and spleen.

How is a Portosystemic Shunt Diagnosed?

Most patients are diagnosed due to a concern for one or more of the symptoms above, but some are discovered because of abnormalities in routine blood testing (such as done during a puppy or annual exam). Once there is suspicion for PSS, a blood test called a bile acids test is often performed. This is a test of general liver function, but patients with PSS will have abnormally high bile acid levels. This finding will prompt an imaging test to diagnose the presence of the abnormal vessel as well as its appearance. PSS can take many forms, so it can be important to know the shunt configuration before deciding on the nature of treatment. There are other conditions which resemble PSS on diagnostics without the presence of an abnormal vessel.

The most common methods of diagnosis are ultrasound and computed tomography (CT). Ultrasound, in experienced hands, can detect most PSS and give information about the size and location of the aberrant vessel. There is a fair amount of variation in the connection points of the abnormal vessel from one patient to another, so a “roadmap” is key to pre-surgical planning. CT is a highly useful tool for PSS diagnosis and gives detailed visual anatomical information which can be reconstructed into a 3-D format. Whether ultrasound, CT or both are used, the entire abdomen is assessed to screen for other abnormalities, including bladder stones.

How do you Treat Portosystemic Shunts?

Once an extrahepatic portosystemic shunt is diagnosed, medical management should be initiated.  This treatment will help control the symptoms previously described, but does not reroute the abnormal blood flow and surgery is ultimately recommended in most patients.  Medical management often consists of the use of medication to decrease the absorption of ammonia by the intestines, antibiotics, low protein diets, and anti-seizure medications.

Survival times reported with medical management range from five months to more than seven years following diagnosis.  In animals with PSS, medical management is generally recommended for a minimum of two weeks prior to undergoing any form of anesthesia for diagnostic information or surgical treatment.

Lactulose can decrease the amount of ammonia absorbed by the intestines during the breakdown of proteins. Ammonia contributes to the abnormal neurologic signs in dogs with portosystemic shunts.

Gradual closure of the PSS is considered the treatment of choice in most animals due to improved outcomes. Several different surgical techniques are available to cause gradual occlusion of the abnormal blood vessel, including the use of cellophane, ameroid constrictors, hydraulic occluders, and coil embolization. 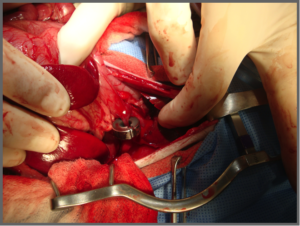 For the majority of these techniques to be performed, the abdominal cavity must be opened along the midline to allow exposure of the liver.  The abnormal vessel is located and a device is applied around the vessel where the blood flow enters general circulation.  Cellophane bands and ameroid constrictors stimulate scar tissue formation when applied allowing gradual closure of the vessel, whereas a hydraulic occluder can be gradually inflated or deflated through injection of a port placed under the skin at the time of surgery.

Alternatively, coil embolization is performed using large catheters which are inserted through the blood vessels of the neck.  Coils are inserted from within the blood vessel and gradually result in clotting and closure of the abnormal vessel.  This technique is most frequently used with intrahepatic shunts. 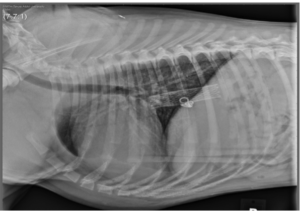 A radiograph demonstrating coil embolization with a stent in the caudal vena cava and coils at the location of the entering anomalous vessel.

If any bladder stones were noted on imaging prior to surgery, these can be removed during the same procedure through an incision into the bladder (cystotomy). Spay or neuter can also be performed.

What are the Possible Complications of Surgery? Following surgery, most pets are hospitalized for 48 – 72 hours to monitor for postsurgical complications and to administer pain medications.

Following discharge from the hospital, a specialized low protein diet is continued until blood work shows evidence of improved liver function.  Lactulose may also be continued to help reduce abnormal neurologic signs while the liver recovers.