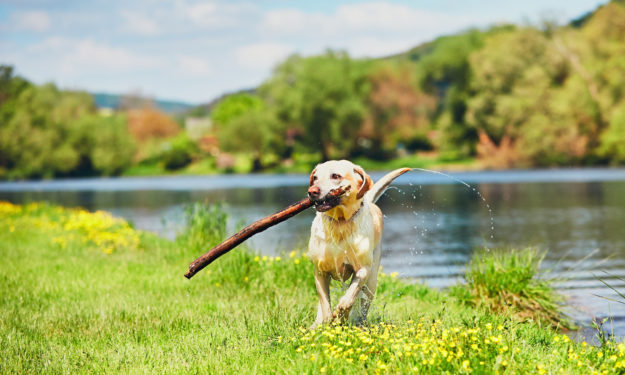 As they say, “If you don’t like the weather in Wisconsin, wait 10 minutes and it will change.” Although our rapidly changing weather conditions are good fodder for jokes, they also create the ideal environment for Blastomyces fungi. Typically the peak season for Blastomycosis comes in late April, but in 2018, due to our abnormally late winter/early spring and vastly fluctuating weather conditions, we are seeing cases much earlier than normal.

Blastomycosis is a disease caused by the fungus Blastomyces dermatitidis. This fungus is common in moist, acidic soil and is considered endemic to Wisconsin, the Great Lakes, and the Mississippi and Ohio River valleys. The Blastomyces fungi grow best in wet areas along riverbanks, lakes, streams, and swamps, as well as locations with decaying organic matter such as wooded areas, forests, and farms.

The fungus produces small, light spores similar to bread mold that get into the air and can be inhaled deep into the lungs. Both humans and dogs can become infected by inhaling fungal spores; but you cannot contract the infection directly from your pet. In endemic areas, our dogs are nearly 10 times more likely to come down with blastomycosis than we are.

Once the spores are inhaled, the fungus sets up shop in the lungs causing a fungal pneumonia. From there it often spreads to other sites – most commonly to the eyes, bones, and skin.

A diagnosis of blastomycosis is best made by finding the yeast organisms in a microscopic sample taken from the skin or lymph nodes. Thoracic radiographs, ocular examinations, and urine testing can also help with definitive diagnosis.

Treatment for blastomycosis involves anti-fungal medications such as fluconazole, itraconazole, and amphotericin. Because a severe inflammatory response occurs as the fungal cell walls break down, most patients are started on low doses of steroids to help control inflammation during the first few weeks of treatment. Recheck chest radiographs or Blastomyces urine antigen testing are used to determine how long patients will require treatment, but this is usually for at least 6 months, frequently longer. Dogs have about a 25% chance of relapse over the following year, but typically respond well to another course of antifungal medication.